Nitrogen fertilizer imports in the EU

In an interesting statistical coincidence, imports of Nitrogen (N) fertilizers into the EU during July 2018-June 2019 amounted to an almost exact tonnage as during the same period the year before: 4109 kt N.

Urea is the most imported N fertilizer. However, its import share decreased in the last ten years from 64% to 52%. Conversely, UAN imports went up from 6% to 15% over the same period. However, the recently imposed anti-dumping duty may affect its future share as it has already significantly reduced the volumes from the countries (Russia, Trinidad and Tobago, USA) subject to the duty since April 2019.

NPK and DAP are among the most popular fertilizers coming from outside the EU, representing 11% and 7% of N imports respectively.

Russia supplied 35% of the total N tonnage, mainly in the form of urea, NPK and UAN. Other top suppliers were Egypt and Algeria, both exporting mainly urea, accounting for 21% and 9% of total N imports respectively. These countries have developed significant N production capacities based on the availability of low-priced natural gas. As a result, imported N fertilizers represent 30% of EU consumption today, up from around 20% a decade ago, effectively reducing the share of domestic EU suppliers. 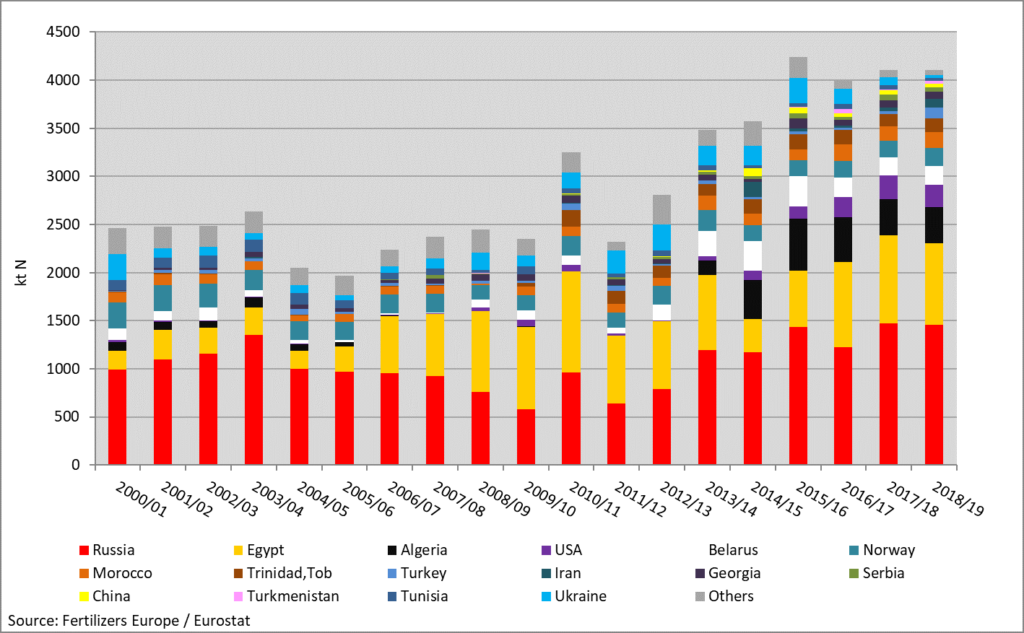 Previously working for a Polish fertilizer producer ANWIL, Michał joined Fertilizers Europe in 2007 as analyst in Trade and Economic Committee. In 2010 he took over as Manager, Market Analysis. As from 2019, Michał is also working as Senior Energy and Climate Advisor.