How fertilizers are made

The fertilizer industry transforms millions of tons of air, natural gas and mined ores into plant nutrition products based on the three essential nutrients nitrogen, phosphorus and potassium. But how are fertilizers produced?

For nitrogen-based fertilizers, the largest product group, the process starts by mixing nitrogen from the air with hydrogen from natural gas at high temperature and pressure to create ammonia. Approximately 60% of the natural gas is used as raw material, with the remainder employed to power the synthesis process.

The ammonia is used to make nitric acid, with which it is then mixed to produce nitrate fertilizers such as ammonium nitrate (AN). Ammonia may also be mixed with liquid carbon dioxide to create urea. Both these products can be further mixed together with water to form UAN (urea ammonium nitrate) solution.

PHOSHPORUS (P) Phosphorus-based fertilizers are produced from mined ores. Phosphate rock is primarily treated with sulphuric acid to produce phosphoric acid, which is either concentrated or mixed with ammonia to make a range of phosphate (P2O5) fertilizers.

Potassium is the third major plant and crop nutrient. Potassium-based fertilizers are also produced from mined ores. Several chemical processes can be used to convert the potash rock into plant food, including potassium chloride, sulphate and nitrate. 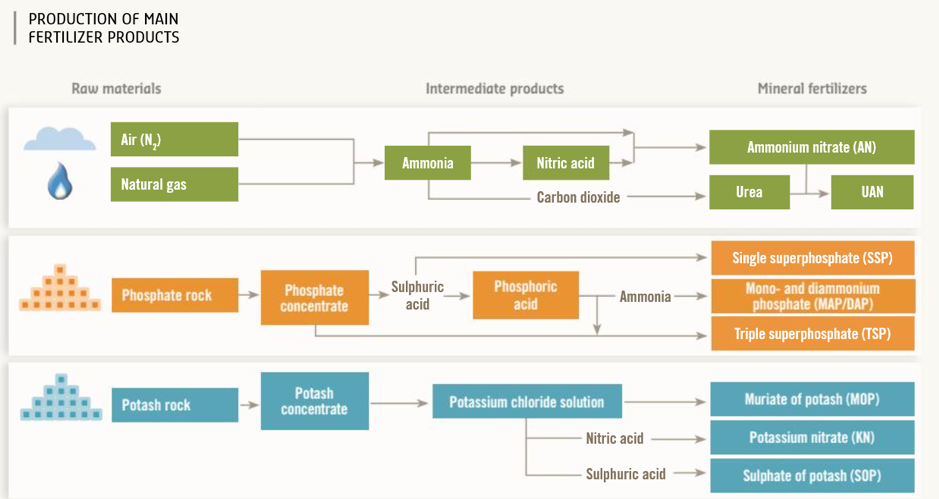